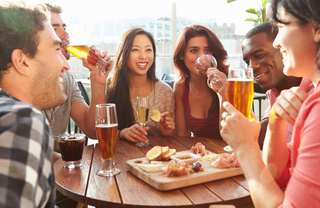 New York City is known around the world for its towering skyscrapers, bustling streets, and renowned works of art.

For old-world charm in the heart of the city, nothing beats Stone Street. This locale is home to some of most scrumptious meals and alcoholic concoctions around. It’s a well-kept secret that this narrow cobblestone street in the heart of FiDi is the place to be from dawn until dusk. Here’s a taste of what you can expect.

You’d be missing out on this one-of-a-kind experience if you didn’t receive a quick history lesson on its origins. Stone Street earned its name by being the first street to (you guessed it) be paved with stone in the city back in 1658 when Wall Street was nothing more than wood.

In the mid-20th century, this alley was overlooked as the city built up around it. It quickly devolved into your typical Hollywood gangster scene before being repaved in the 1990’s when it was officially branded a Historic District.

Since then, restored lofts and warehouses dating back to the 1830’s have become restaurants and bars. The street is lined with delicious eats and lovely drinks, often featuring outside seating right in the middle of the street during warmer months.

It’s almost like walking into an old European street. The noise of rumbling engines and honking horns subsides as you’re whisked away to somewhere foreign, exotic, and delightful.

All of that is, of course, lovely. However, the real reason you come to Stone Street is for the food. So, here’s what lies in store upon your arrival.

If you’re stopping in for a drink, then why not celebrate the area’s rich Irish heritage at The Dubliner? This bar is an authentic replica of the traditional Irish pub, complete with pub fare and a full bar. Seating is both indoor and outdoor during the summer, so take a load off and enjoy a cocktail from the old country.

If Irish whiskey isn’t your cup of tea, then head next door to a more middle-European experience. Bavaria Bierhaus is a German beer hall complete with schnitzel and bratwurst where the servers wear traditional Bavarian clothing. There’s ample seating, and the large plates of delicious German classics.

Across from the Dubliner is where carnivores get their fix. This all-American eatery features tender smoked meats paired with American whiskeys and craft beer. It’s exactly what you’d expect, which makes it a favorable destination for those who know exactly what they want.

This is the classic, rustic tavern that Stone Street is known for. They serve wine, beer, and burgers here, but most people come to watch NYC’s biggest sports games.

No one does pizza like Adrienne’s artisan, brick oven pies. Everything in this upscale setting is made to order, but it isn’t just the pizza that draws customers in. Crisp salads, lasagna, and eggplant parmesan paired with fine wine are on of the best ways to end a busy day in the city.

Intimate and elegant, Vintry was made for the connoisseur. Their cocktails are masterfully crafted, but the impressive list of wines keeps New Yorkers coming back for more. Complete with a tapas-style menu steeped in both French and Spanish influence, what’s not to like?

This is where you’ll find FiDi’s craft beer scene on display. The Growler only serves suds from independent American craft brewers. Stop in to sample some of the most unique creations from around the country, then enjoy a New York staple; hot dogs.

This was the first pub to open on Stone Street, quickly becoming a beloved stop in FiDi by locals and office workers alike. Their menu features everything from oysters to gyro sandwiches and even includes a raw bar. You’ll find an impressive list of beer, wine, and cocktails here, but good luck finding a seat during the lunch rush.

If you’re short on time or simply aren’t feeling all that hungry, then you can’t go wrong with coffee and a pastry from Finacier. This café chain is a favorite on the island, offering a retreat from the hectic lifestyle of Downtown.

Finally, you’ll arrive at Fraunces Tavern (yes, these destinations were in order from one end of the street to the other). This tavern offers up a little history with their food and booze, being one of the oldest bars in the entire city. Since 1762, this bar has served everyone from British officers to Revolutionary War generals and the ever-changing public in Downtown.

While the building may not be in its pure historic condition, you can still grab a bite to eat where George Washington himself did back in the day. The rustic appearance and power lunches create popular lunch break spot, but their dinner menu and impressive drink selection are something you won’t want to pass up.