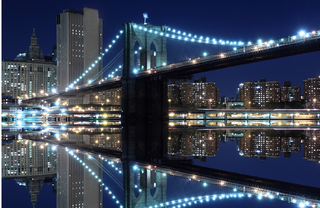 The Brooklyn Bridge is one of the oldest and most iconic structures in all of New York City. See how many of these tidbits you were aware of, and which ones you’ve never heard of before.

1. The Bridge Was Built Thanks to Generous Bribes

Prussian engineer John Augustus Roebling first imagined what would become the Brooklyn Bridge as a way for New Yorkers to have an easier commute. Heading across the East River to Manhattan at the time was a rough and often freezing cold endeavor. With a suspension bridge in place, the working class could catch a little bit of a break.

While the idea was honorable, it wasn’t enough to set things in motion. An infamous politician by the name of William Tweed, known as a kingpin at the time, bribed municipal council members with a sum of $65,000 to encourage them to fund the project. That would be the equivalent of over $2 million dollars today.

It wasn’t until 1867 that the name “Brooklyn Bridge” appeared in the Brooklyn Daily Eagle. Even then, the name didn’t stick until 1915. While the bridge’s current name might seem like common sense, the city thought that Great East River Bridge was a much better name at the time. For a short while during its construction, it was also known as the Great East River Suspension Bridge.

The official name given upon its dedication in 1883, despite the Daily Eagle already giving it the perfect name, was New York and Brooklyn Bridge. Over time, it just became easier to call it by the latter in conversation. A strong sense of community pride in Brooklyn also helped make its current title official.

Despite designing and working on the Brooklyn Bridge for years, John Augustus Roebling would never live to see the final product of his labor. During 1869, he was taking measurements for the project when a ferry crushed his foot. It’s an odd accident, but it left Roebling with tetanus. Without a cure at the time, he passed away shortly after.

4. Bad Luck for the Roeblings

After his father’s passing, Washington Augustus Roebling took over as chief engineer on the Great East River Bridge project. Unfortunately, he would also run into serious trouble while working on the bridge’s foundation.

At the time, the best way to head underwater and build the massive foundations needed for the bridge was to use a caisson. This construction tool is a watertight chamber with a hole in the bottom that keeps water out via air pressure. If you’ve ever watched Pirates of the Caribbean, Jack Sparrow does the same by turning a small boat upside down before submerging himself in water.

Upon resurfacing, the compressed air inside the caisson would often cause individuals to suffer from decompression sickness, which is now known as the bends. The younger Roebling came down with a terrible case in 1872, but was able to return to the project after a few months.

5. The Brooklyn Bridge and Female Power

While Washington Roebling was bedridden with decompression sickness, his wife stepped in as chief engineer. Emily Warren Roebling went from errand runner to full commander of the project. She oversaw the design, construction, and business management of the entire process during her husband’s absence.

She is now known as a pioneer of her time due to her intense and outstanding contributions to the bridge. After the project was finished, she went earned a law degree at New York University and became an avid proponent of gender equality. Thanks to her tireless dedication, she earned the honor of making the first trip across the Brooklyn Bridge.

6. The Bridge Doubled as a Wine Cooler

During construction, workers built several vaults inside the bridge’s anchoring towers for maintenance purposes. However, numerous business and wealthy New Yorkers quickly realized that the temperatures inside were ideal for storing wine. The city gave the green light on turning these vaults into wine cellars, and companies like A. Smith & Co. and Luyties Brothers began forking over rent. Monthly prices ranged from $500 to $5,000 just for storage space in the new structure.

The wine cellar idea didn’t last for long. It was shut down during World War I, leaving the vaults vacant for years until city officials decided to turn one of them into a fallout shelter during the Cold War. The vault was filled to the brim with food rations and medical supplies. Since it was never used, everyone eventually forgot it existed until a routine inspection of the vault took place in 2006.

The anchoring tower on the was once the location of someone’s home. That someone happens to be George Washington, who occupied the space during his first year as Commander-in-Chief.

Old documents and hand-colored lithographs show that the original color of the Brooklyn Bridge was a shade of red called “Rawlins.” When city officials announced that they would repaint the bridge in 2010, there was a heated debate over whether it was originally red or tan. After the shade of tan was named “Brooklyn Bridge Tan,” the debate ended despite what the documents said.

For twenty years, the Brooklynn Bridge remained the longest suspension bridge in the world at 5,989 feet. The record was beat, however, in 1903 when the Williamsburg Bridge was built on the same river.

The city continually produces unique and iconic architecture, with 19 Dutch being its newest addition. Chic-yet-comfortable living spaces are imbued with the Dutch concept of "gezellig", creating a warm and familiar home in the heart of Manhattan’s Financial District.