Check Out The Fulton Center 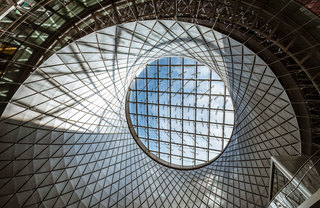 It’s not difficult to find hotspots around the [apartments for rent New York](https://www.19dutch.com) — places where people seem to love to congregate, hang out, and have a great time. The museums on Fifth Avenue, for instance, draw in tons of visitors every year, and places like Central Park are near the top of almost everyone’s “to visit” list when they first get to Manhattan. We’d argue the Fulton Center is another such draw, a focal point for the city, if for no other reason than [it was designed to be that way](https://www.world-architects.com/en/architecture-news/reviews/fulton-center-1):

“Situated in the heart of Lower Manhattan, the Fulton Center is designed to be a catalyst for the redevelopment of the area. The dynamic transport environment is a vital link to this commercial center and its growing residential sector, streamlining connectivity between eight New York City subway lines and enhancing the user experience for 300,000 daily transit passengers.”

But it goes even deeper than that. The stores, services, and cool events this locus of activity offers ensure that it’s a place people want to visit, and today, we’ll be highlighting some of those to give you an idea of what, exactly, makes the Fulton Center the sort of New York City hotspot you should be checking out.

This Is the Fulton Center

When the Fulton Center opened in 2014, saying it was a “big deal” might be something of an understatement. The New York Post ran a whole article on the opening, recounting some of the challenges that went into its construction:

“After years of delays and hundred of millions of dollars in cost overruns, downtown’s new gleaming transit hub, the Fulton Center train station, finally opens to the public Monday. First envisioned as a way to rebuild lower Manhattan after 9/11, the MTA station was scheduled to open in 2007 and be the Financial District’s answer to Midtown’s Grand Central Terminal.”

And indeed, transportation around the city is a major part of the Fulton Center. It helps connect the subway’s 2, 3, 4, 5, A, C, E, J, N, R, W, and Z lines, and, as far as New York City subway stations go, it’s quite well designed. The architecture, done by Grimshaw Architects (the same minds behind structures like Pulkovo Airport in St. Petersburg, Russia, and Via Verde in New York) is widely praised for one of its central features — a giant oculus above the station’s center:

“The highlight of the station is the 53-foot-diameter glass oculus, called the "Sky Reflector-Net", that hovers above the grand atrium. It's a spectacular piece of architecture that allows natural light to flood down into the station. It's truly amazing to behold.”

That high-minded aesthetic is part of the core of Fulton Center’s look, and something you can see all around the well-designed space:

“Fulton Center is organized around a large-scale atrium contained within an elegant, transparent façade. Tapered steel columns draw inspiration from the historic neighborhood’s cast-iron buildings and complement the integration and restoration of the adjacent Corbin Building.”

But folks don’t just come to the Fulton Center because they want gawk at the architecture or get around the city. Fulton Center doubles as a part of the Westfield World Trade Center mall, so the shops here are a major attraction as well. Fulton Center has more than 30,000 square feet of retail space, and during construction, was billed by the MTA as “New York’s Next Great Public Space.” Indeed, you’ll find places to shop not only on ground level, but the various other levels of the Fulton Center while you’re exploring the area. In fact, the addition of retail spaces here was part of what prompted the change in name from the “Fulton Transit Center” to simply the “Fulton Center,” as part of a plan to make perceptions of this space more about hanging out and less about trying to get around on the subway.

It’s a particularly attractive spot if you’re after a quick bite to eat. The Great American Bagel & Bakery, Wasabi Sushi & Bento, and Shake Shack all provide some delicious casual sustenance while you’re on the go, making Fulton Center the perfect stopping point if you need to fuel up before a trip somewhere else in the city. Perhaps most attractive among Fulton Center’s offerings, however, is the Freedom Wine Cellar located on the Street Level, a veritable bastion for high-quality liquor. Travelers throughout New York will find themselves stopping here after work to pick up a bottle of something nice on their way home, and the level of convenience is something that’s hard to find from similar liquor stores in the area.

You’ll find even more should you venture over to the adjacent Corbin Building. Originally, it was scheduled to be demolished, but was later incorporated into the Fulton Center project, as part of the transit complex and to serve as additional retail space. All-in-all, you’ll not want for things to explore around the Fulton Center, and that’s just on a normal day. Don’t forget that they’re prone to having the occasional event run here from time to time, giving you even more reasons to check it out. When you’re done, feel free to wander into the neighborhood as well. You’ll soon learn that there’s even more to enjoy out on the streets, and a single visit just won’t do it all justice.

These Apartments for Rent in New York Put You Close

When it comes to having a front row seat to New York City action like the Fulton Center, apartments like 19 Dutch are the best in the proverbial house. This luxurious Financial District community puts you in the neighborhood with all sorts of places of interest, like Nobu, Pier 17, and the aforementioned Fulton Center — just to name a few. What’s more, this is a community where convenience and comfort are second to none, meaning you’ll experience city life in a manner quite unlike what you’d consider average. Ready for the superlative Manhattan lifestyle? Check out 19 Dutch, and learn more about making one of these apartments home today.