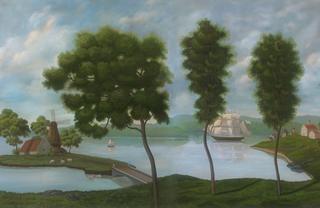 The Financial District is one of the most historic locations in New York. It was one of the first areas to be developed in the city and has a stunning architectural presence. Many consider “FiDi” to be a business locale, and it is! However, more New Yorkers are calling this neighborhood home.

Where is the Financial District?

One of the two largest business districts in New York City, the Financial District is a neighborhood located on the southern tip of Manhattan Island in New York. It is bound by the West Side Highway and the Hudson River on the west, Chambers Street and City Hall Park on the north, Brooklyn Bridge and the East River on the northeast, and South Ferry and the Battery on the south. It encompasses the area south of City Hall Park in Lower Manhattan.

The heart of the Financial District is often considered to be the corner of Wall Street and Broad Street, where you can find the New York Stock Exchange and the Federal Reserve Bank of New York. However, the area between City Hall Park and the bottom of the island is emerging as a desirable residential neighborhood.

History of the Financial District

The strategic southern tip of the island of Manhattan was originally settled by the Dutch and called New Amerstam. The Dutch established this neighborhood as a primary center for political and administrative occupation from as far back as 1624.

The skyscrapers, and business community that came along with them, went up mostly in the late 19th and early 20th centuries. As the financial power of New York grew, so did the influence of Wall Street. People began living in areas such as Battery Park City and Southbridge Towers from about 1982, and there has since been a shift towards residential development.

The World Trade Center, a complex of two identical skyscrapers (the Twin Towers) and five low-rise buildings constructed in the 1970s, defined the Lower Manhattan landscape until it was destroyed during the terrorist attacks of September 11, 2001.

The destruction of the “Twin Towers” spurred development in the neighborhood due to tax incentives provided by federal, state, and local governments. A good number of FiDi NYC apartments are buildings and warehouses that were converted into residential areas.
Highlights of Living in the Financial District
Though the Financial District is the heart of commerce in New York, there are many reasons why FiDi apartments are in high demand among young professionals and families.

By day, the buzz of Wall Street and financial institutions fill the streets, but after businesses clock off FiDi turns into one of the city’s quietest neighborhoods.

Dazzling views of the skyline, stunning architecture, and cobblestone streets make for an idyllic place to call home. As you walk through the Financial District, it’s hard not to become immersed in the rich history of the area.

Luxury Wall Street apartments sit alongside upscale shopping malls, restaurants, and bars. But it's not all posh, high-end establishments: FiDi is also home to charming cafés and bistros.

Tall buildings are not the only things to see in the Financial District. There are iconic landmarks like the Brooklyn Bridge and the waterfront Battery Park, not to mention things to do like bike and boat tours, golfing, and more.

Once the decision to move to the Financial District has been made, your next hurdle is to find a place to live. When searching for apartments for rent in Financial District NYC, you’ll find several viable options. However, finding Financial District Manhattan apartments that you love and can move into sooner rather than later becomes a little more complicated. With that in mind, follow these tips to simplify the process.

Knowing how much you can expect to pay may help you decide which area to begin your search.

Transit access, closeness of preferred amenities, and neighborhood noise are some of the things to consider when choosing among the FiDi apartment rentals available to you at your budget.

There are myriad websites and apps you can use to find your perfect apartment. Additionally, many developments are available to people online. For example, you can book virtual tours of 19 Dutch properties directly through our website.

While virtual tours are a great tool, you still need to see every place you’re considering in-person to ensure it lives up to what’s online. You’ll also be able to check for deal-breakers such as water damage, mold, vermin, and more.

Once you’ve decided on a place, the management company or landlord will likely ask you to fill out an application. Prepare to also have enough money on hand to cover the first and last month’s rent and a security deposit.

Located just four blocks east of the World Trade Center, the building features 63 stories with 483 rental units and 8,100 square feet of retail space. You can access it from numerous public transportation options and the building features easy access to the subway station, the PATH terminal, and the new Brookfield Place complex at Battery Park City.