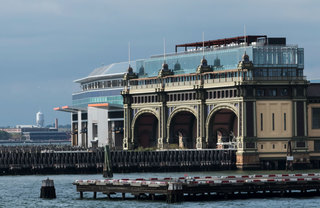 The Battery Maritime Building deserves something of a special mention, as it’s been a neighborhood fixture since the early 1900s.

Added to the National Register of Historic Places in 1976, this Beaux-Arts masterpiece at the corner of South and Whitehall Streets has long been a ferry building, transporting commuters across the water to destinations like Governor’s Island, and even served as an Army Post for a period in the 1950s.

“After an endless-seeming string of setbacks, it’s finally a done deal to convert downtown’s underused landmark Battery Maritime Building into a luxury hotel and restaurant — a project that’s frustrated city planners for decades.”

Just what do the years ahead hold for this historic New York location, and how will its upcoming metamorphosis change how visitors experience this timeless building? That’s exactly what we’ll be taking a look at today, as we talk about the planned changes coming to the Battery Maritime Building in the not-so-distant future.

If you’re a long time New Yorker, you probably already know a bit about the Battery Maritime Building, and it’s long history as a location where ferries arrive and depart. A long-standing landmark in the city, it was constructed in 1909, designed by the firm Walker and Morris, and is notable for its rather unique architecture, which includes more than “8,000 elements of cast iron, steel plates and angles, sheet copper ornamentations, ceramic tile and stucco paneled walls and a mansard roof system”

At present, it still serves as a ferry point for arrivals from Governor’s Island, but what you may not have known, is that there have been plans to transform this space since as early as 2009, when Dermot Construction won the bid to convert the building into a hotel. Delays, including a rather substantial setback when Hurricane Sandy devastated the East Coast, had put those plans on hold:

“The project was originally being developed by the Dermot Company, which signed a 99-year lease in 2015 with the city. But since Dermot left the project after completing about 60 percent of the work, the lease transferred in 2017 to the new development team, which includes Centaur Properties and Cipriani.”

You might recall that this isn’t the first time the building has seen some renovation work. During the years between 2001 and 2005, approximately $36 million were spent restoring the building’s exterior and replacing a number of deteriorating wooden piers at the site. The more recently proposed development, however, is more of a conversion of the maritime building’s unused space, with the intention of further transforming the Financial District, aiding its evolution into a modern hangout for the next generation of upscale Manhattanites.

Recently, that conversion project was revitalized, courtesy of some new funding, and there are a few central players in this redesign that are worth mentioning. First are the current leaseholders for the property — Centaur Properties and Cipriani S.A. They acquired the lease after Dermot Company failed to pay up on their rent, and was ousted from having anything to do with the maritime building. And if that last name, Cipriani, sounds familiar, it’s because Cipriani is the owner and operator behind several luxurious restaurants, including New York City’s very own Harry Cipriani Bar, and, before it’s closing, the Rainbow Grill at 30 Rockefeller Center.

It makes sense, then, that part of the redevelopment plans for the Battery Maritime Building will be a new rooftop restaurant, to be run by Cipriani, of course. What kind of restaurant? Firm details are sparse at the moment, but Cipriani does have a penchant for Italian fare, as evidenced by their other New York-based restaurants, so we might be seeing a brand new Italian spot coming to the South Street spot in the near future.

That might be a welcome addition too. While there are plenty of Italian restaurants in Lower Manhattan, few, if any, are as close to the southern tip of the island as the Battery Maritime Building location would be, and some extra variety would give residents in the area yet another great eatery to add to their short list, assuming everything pans out as intended.

Recall that we mentioned there was more than one player in this particular renovation game? The other happens to be Midtown Equities, who will be putting a sizable mezzanine loan to the project, and will later convert to an equity stake. That gives us three large developers putting their experience and resources together for one $100 million project. It’s all set to wrap up in 2020, at which point the transformed Battery Maritime Building will provide a whole new set of reasons for you to check it out.

In addition to the proposed restaurant, the Battery Maritime Building will be the site of a fashionable hotel and event space, meaning we may even see some conventions or live performances coming to this oft-overlooked waterfront property. We’re definitely excited for what the future holds, and confident you’ll have ample reasons to want to take a peek at the transformed maritime building once all that development wraps up next year. Be sure to mark your calendars for the occasion!