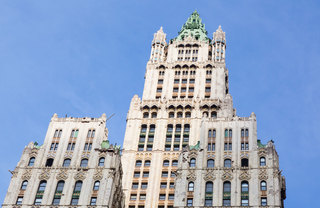 Woolworth has gone through a few changes over the years, but it remains as one of the most iconic buildings you’ll find on Manhattan island. Ready to learn more about this notable Financial District landmark? Read on, as we give you some of the backstory behind this Broadway wonder.

Story of the Woolworth Building

Head to 233 Broadway on the island of Manhattan, and you’ll come across this 792-foot tall (that’s 55 floors) building. From the completion of its construction in 1912 all the way until 1930, the Woolworth Building was the tallest in the world, and certainly a contender for that with the most interesting history.

It all started with the building’s namesake: FW Woolworth. The businessman, owner of the famous chain of five-and-ten-cent stores, wanted a building to house the headquarters of his powerful company. He hired architect Cass Gilbert to design the structure, and after some back and forth between the two, Woolworth’s vision evolved from a simple 12-story building into a massive structure that would eclipse the size of the New York World Building.

A few redesigns later, and the plans settled on by Gilbert and Woolworth beat out even the Metropolitan Life Insurance Tower (which was, at the time, the tallest building in the world). It cost a pretty penny, about 13.5 million dollars in that day (which would be roughly $342 million dollars nowadays). To Woolworth it must have been well worth the expense, though. He got bragging rights for having the tallest building in the city, and a place for his business to spread its wings.

Those halcyon days couldn’t last forever, though. Through several renovations and restorations, the Woolworth Building changed hands several times, and nowadays, is property of the Witkoff Group. The nature of the building has shifted radically, but in spite of that, it still holds much of the beauty of its original design.

That lobby, once known as the “arcade” is still as ornate as ever, and though it’s pretty much closed unless you have an invitation to enter the building, it serves as an interesting reminder of the times when the Woolworth Building was king of Manhattan’s skyscrapers.