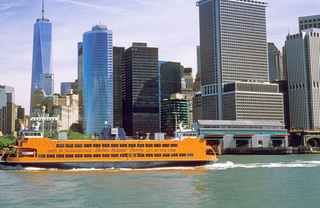 New York City is filled with building as old as Manhattan itself. Several architectural wonders have survived the passage of time to give us a glimpse of what life was like for early New Yorkers in a time when commuters took ferries and the Brooklyn Bridge was an idea waiting to be hatched.

Luckily, you can take a trip to Governor’s Island and catch a glimpse of one of the oldest surviving buildings in the city’s history. The Battery Maritime Building remains intact after more than a century. This unique ferry terminal has a long history filled with both high and low points. More importantly, it has a bright future ahead.

The Battery Maritime Building was designed by Richard Walker and Charles Morris during a time when ferries were still a vital means of transportation to Manhattan. It was completed in 1909 and remains the only surviving building of its kind on the East River today. Given the popularity of ferries for commuters in New York, it’s incredible that only this structure remains out of so many to commemorate that time period.

The Whitehall Street Ferry Terminal, a now non-existent twin terminal, once sat across the river on Staten Island. It was also a long-lasting ferry slip until a tragic fire destroyed the building in 1991. This structure is now replaced as of 2005, but shares little in common with its older twin.

Looking into the Battery Maritime Building’s construction, its unique design is considered Beaux-Arts Structural Expressionism, which means it pulls from architecture features in the Paris exposition of the 1890’s. The building is comprised of cast iron and decorated on its exterior by rosettes, rivets, and glazed-blue tile. Other metals bolstering its construct include rolled steel, copper, and stamped zinc.

Ferries would arrive in slips 5, 6, and 7 underneath the enormous pink stucco lined arches. Behind these slips awaited thousands of passengers in a 55,000-squar-foot waiting room on the second floor. This space was considered one of the grandest in the entire city, so much so that is included stained and patterned glass decorations alongside elaborate plaster finishes.

While it was designated as a New York City Landmark in 1967, the years leading up to this accolade almost left the building in shambles. Brooklyn’s ferry service shut down in 1938, leading to a severe lack of traffic at ferry terminals like this one. As the years went on, buildings of this kind began to deteriorate beyond repair with significant architectural features lost to time and decay. The Battery Maritime Building was, quite luckily, picked back up by a series of agencies in the city starting in 1957. They began alterations and additions that once again changes the interior face of the building, but also saved it from destruction.

After several changes in ownership, the building was handed off to the Department of Transportation who turned its interior space into offices. Once the department changed locations, its beautiful stained-glass windows were boarded up with plywood and the enormous waiting area became nothing more than a mothball-filled space holding DoT files until the turn of the century.

There were several ideas to revitalize or repurpose the building leading up to 2000, but none ever came to fruition. One promising 1980’s idea came from William Zeckendorf Jr. and Richard Kahan, who wanted to make the Maritime Building the base of a 60-story office tower. After a recession, that never came to pass. All the while, the iron of the ferry terminal became green and grimy as the years went on.

Starting in 2001, the city’s Economic Development Corporation poured $60 million into renovations of the building’s exterior. They replaced historic windows, doors, and light fixtures with picture-perfect replicas and even painted the exterior green to brighten up the iron’s natural oxidization. Those renovations, unfortunately, ceased in 2006. However, this gave the building new life and inspired others to take a closer look at this once New Yorker-packed hotspot.

Plans are now underway to revitalize Governor’s Island through new and re-development in order to make it a cultural and commercial center. Some of those features have already finished with the reopening of the island in 2018. Other plans to turn the East River into a recreation/commercial shopping center are also unfolding. To the south, the Battery Maritime Building’s twin (the Whitehall Ferry Terminal) is being rebuilt as you read this article.

The future looks bright for further renovations and repurposing of this timeless New York classic. It’s unclear whether construction ideas will come to fruition this time around, but revamped surroundings can only mean one thing: The Batter Maritime Building is about to get a major makeover.

After major changes, Governor’s Island is once again open to the public on a seasonal basis. You can take a ferry to the 172-acre island from May 1st to October 31st and enjoy the park for all its beauty, including the Battery Maritime Building. It’s your chance to see this historic, architectural marvel up close and personal.

Pack a lunch for your trip and enjoy a little sunshine at one of the island’s picnic tables. Bring your favorite meats or veggies and take advantage of designated grilling stations or stop at any of the vendors to try a wide variety of food and drinks. It’s an excellent way to spend the day with family, friends, or a significant other.

For more information about visiting the island, check out the official website.