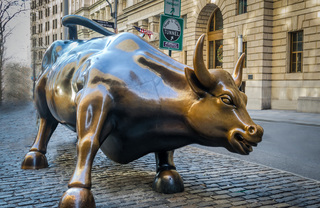 Even your average American who group up outside of New York would probably recognize it if you showed them a picture, and this one-of-a-kind sculpture by Arturo Di Modica actually has quite the story to tell about its origins and history. Since statues can’t speak, however, we’ll be delivering that story on its behalf today, as we delve into the creation and intriguing legacy of this singular city landmark.

It might shock you to learn this, but the Charging Bull statue didn’t start off as an officially sanctioned installation of art. Renegade artist Arturo Di Modica first crafted the statue at the Bedi-Makky Art Foundry in Greenpoint, Brooklyn, in 1987, following the stock market crash.

His idea was to create a “symbol of the strength and power of the American people,” and so, the Charging Bull was crafted, then transported to Manhattan in secret by Di Modica and his accomplices in 1989, placed below a towering Christmas tree in front of the New York Stock Exchange during the night, a “gift to the people of New York City,” and, by extension, America.

As surprised onlookers crowded around his “Magnum Opus” the next day, admiring the admittedly impressive work of art, Di Modica handed out fliers describing his installation. That wasn’t the end of it, though, as NYSE officials, in perhaps an unsurprising twist, were not happy at a piece of guerilla art tarnishing the middle of Broad Street.

And so, displeased, those NYSE officials leveraged their power to have the statue removed. The Charging Bull was hauled away and placed in storage, a move that drew derision and ridicule from New York’s populace. Even the NY Post got in on mocking the NYSE, publishing a headline that read “BAH HUMBUG...NY Stock Exchange grinches can’t bear Christmas-gift bull.” With public support clearly in favor for the statue, it was only a matter of time before it made a triumphant return.

And return the Charging Bull did. After reading that NY Post story, Arthur Piccolo, a Manhattan businessman and member of the Bowling Green Association (the guys who have some say so over the properties in that area of the city), decided to reach out to Di Modica.

They chatted, and surveyed a spot by Bowling Green Park that would make for a suitable permanent location for the Charging Bull. With the help of the park (via then-Commissioner of New York Parks, Henry Stern), and then-Mayor of New York Ed Koch, the move was made on the morning of December 20, 1989. New Yorkers even had a celebration for it on the following day, and there has been the statue’s home for more than a quarter-century.

The Charging Bull statue has enjoyed prominence in its many years over at Bowling Green Park. It became an instant tourist attraction after it was moved, and is one of New York City’s most photographed works of public art. It’s popularity has international appeal, drawing in visitors from India, China, the UK, and just about any other spot you can point to on a globe.

That popularity has not come without criticism, however. To some, it is seen as a grotesque celebration of unchecked American capitalism, a scourge to be routed, and an idea to be thoroughly opposed. Other critics, particularly of the Abrahamic religious persuasions, draw parallels between the Charging Bull and the Golden Calf, that idol made by the Israelites as they awaited Moses’ return from Mount Sinai, intimating that it is symbolic of that which may lead humanity astray from what is righteous and good.

In spite of that, though, the Charging Bull has remained, steadfast, prominently featured in popular culture and a hotspot for tourists to hop on, take photographs, and even rub the horns and nose for a bit of good luck. It’s future may have started of tenuously, but for now, it seems the Charging Bull isn’t going anywhere anytime soon.

Fun Facts to Keep in Mind

As with any good story, there are a few ancillary details you should know that will make the tale just that much more scintillating. Did you know, for instance, that Di Modica spent $360,000 of his own money in creating and transporting the Charging Bull? Or how about the fact that the statue stands at 11 feet in height, 16 feet in length, and weighs roughly 7,100 pounds? Details like that make the story even juicier (and make you wonder how they were able to transport it without anyone noticing). Here are a few more details about the Charging Bull you may not have thought of:

How’s that for a legacy? The Charging Bull made ripples the world over, and is now inexorably linked with the fabric of New York City. Hopefully, you’ll take some time out of your day to check it out soon.