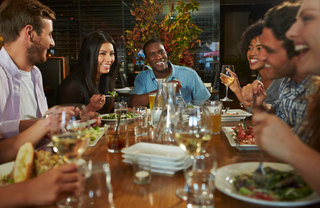 And so it begins. Another year, another installment of Restaurant Week fast approaches around the Manhattan apartments for rent. As with every edition of this fabulous event, you’ll have the opportunity to take on some of the city’s most tantalizing and sumptuous cuisine, and for a great bargain:

“NYC Restaurant Week is the highly anticipated—and often imitated—twice-yearly celebration of dining throughout New York City...hundreds of restaurants throughout the City [are] rolling out special prix-fixe menus for a limited time, [and] this is your chance to revel without a cause.”

Those restaurants number in the hundreds, and those deals range from $26 two-course lunches to $42 three-course dinners. There’s a lot of variety to choose from, obviously, so today, we’ll be going over some prominent options, and providing some guidance on what Restaurant Week is all about so you can make the most of it.

You might already know this part, but it bears repeating for the uninitiated who have never experienced restaurant week before. This event is actually a twice-a-year happening, and what we’re about to witness is the Summer 2019 edition of restaurant week. Now, the time of year has changed, but the amazing variety has not. There are still hundreds of restaurants to explore during restaurant week (about 379, to be a bit more precise), and regardless of which you go to, you can expect some good food.

NYC Summer Restaurant Week 2019 will last from July 22nd to August 16th, and during that time, you’ll be able to check out participating restaurants’ prix-fixe menus, getting either one of those two-course lunches or three-course dinners, depending on when you go. Again, the restaurant selection is vast, so you’ll want to do your research beforehand to narrow down your choices. Speaking of which...

The 300+ restaurants on the Restaurant Week lineup cover just about every kind of cuisine imaginable. There’s so much that we can’t list it all, but you can check out the Restaurant Week Database when you have the opportunity, and we can highlight a few favorites that you just might be interested in seeing for yourself.

There’s something distinctly Manhattan about the idea of having a delicious lunch on Wall Street, which may just be part of Cipriani’s allure. We’re sure the “classic dishes from Harry's Bar in Venice” also play a part in the equation, and the fact that they’ve got a pretty robust selection of Italian food, served in an atmosphere that’s equally fitting for a romantic evening as it is for a powerful business lunch.

Appropriately located on 2 West Street, 2 West overlooks Robert Wagner Park and has a bistro-style atmosphere that emphasizes their selection of “American classic” cuisine. For restaurant week, they’ll have options like seared salmon, delicious chicken, skillet cod, and much more available for you to try.

Over on Broadway, Nobu, the collaborative effort between Chef Nobu Matsuhisa, actor Robert De Niro, producer Meir Teper and restaurateur Drew Nieporent, has a reputation that precedes it. It’s a decidedly New York take on Japanese cuisine, one that is both authentic and innovative. Sushi varieties during restaurant week include rock shrimp tempura, yellowtail sashimi, salmon, arctic char, and others.

Sometimes, there’s nothing more delicious than a good steak. In Lower Manhattan, Mark Joseph Steakhouse delivers with a dining experience that’s equal parts elegant and casual. You’ll find all your typical steakhouse favorites, like seafood and beef, are cooked to perfection, but there’s plenty more where that came from, and fine glasses of wine to pair it with for restaurant week this year.

Think of it as Mexican, but with a twist. El Vez on Vesey Street has its roots deep within the traditions of Mexico, so you’ll find plenty of “ guacamoles, fundidos, ceviches, tacos, quesadillas and enchiladas made from scratch with authenticity in mind.” At the same time, though, they’re known to inject some American flair, and they can get particularly creative when it comes to the cocktails.

The name Wolfgang Puck is well-known in culinary circles and across the world. The famed chef is no stranger to fine dining experiences, particularly if you’re hungry for “top notch cuts of meat.” The name makes sense in that context, and whether it’s a burgers, steak, or fish you’re in the mood for, cut can cook it up right. They’ve also got some fanciful side dishes you’ll want to pay attention to, like the mac & cheese, broccolini, and sumptuous pork belly.

Another Financial District standout, Schilling is one of Michelin-starred chef Eduard Frauneder’s ventures, and serves as a bustling bistro with a modern interpretation of Austrian favorites, infusing Mediterranean influences and adding a massive menu of fine cocktails for guests like you to enjoy when they arrive.

Of all the tips we could provide for NYC Restaurant Week, perhaps the most important would be to remember to make some reservations! After you’ve researched a few options (and backup options) you want to check out this summer, call ahead, and make sure you and your crew can get a table during what’s sure to be a busy time. Beyond that, though, be sure to have fun when you’re out there trying meals, and don’t be afraid to try some new cuisine outside your comfort zone!

Part of Living at the Manhattan Apartments for Rent

One thing you’ll find about calling fantastic apartment communities like 19 Dutch home is how they put you right in the middle of all sorts of amazing city events like restaurant. Indeed, here in the “new downtown,” you’re close to quite a bit that New York has to offer, and no matter what it is you like to do for fun, chances are you can find it somewhere out there in the neighborhood. That’s the thrill of Manhattan living — knowing that nothing is out of reach. Come experience it for yourself; check out what 19 Dutch has to offer today, then drop us a line to learn more.