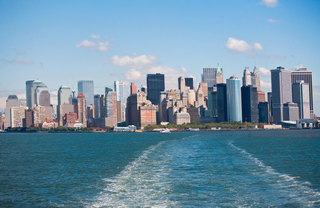 If you’ve been around 19 Dutch — the luxury apartments in NYC, then there’s a good chance you may have heard rumblings about the Honorable William Wall, the one-of-a-kind “floating clubhouse” that’s part of the revitalized Manhattan Yacht Club and the spot to be if you’re a fan of recreation and relaxation on the water:

“Affectionately known as the “Willy Wall,” our clubhouse is an elegant steel barge with an open-air upper deck, and a fully enclosed lower level lounge. The Willy Wall is anchored in New York Harbor just north of Ellis Island. The location boasts spectacular views of the New York City skyline, the Statue of Liberty, and the surrounding waters.”

Did you know this fine New York hangout is named after a real historical figure? Or how about the fact that this has been consistently voted as one of New York City’s finest on-the-water bars? There’s more to good old Willy Wall than meets the eye, and today, we’re going to be taking a look at all the details your friends might have missed when they were first telling you about that “awesome boat where you can get a drink.”

So William Wall Was a Real Guy?

That’s correct, and he was indeed as honorable as his namesake would suggest. As the blurb on the bar’s website notes, he started from humble beginnings, and started working through life the good old fashioned American way:

“The Honorable William Wall was born in 1800 and apprenticed as rope maker in Philadelphia. In 1822, he moved to Williamsburg, where he began selling rope. Wall was a thrifty person and saved his money. Soon, he was able to establish his own company. Wall Rope became renowned for its high quality and grew into the largest rope works in the city. While running his company, Wall also branched out into other pursuits including being the founder and the first president of the Williamsburg Savings Bank.”

After some time, Wall decided it was time to go into public service, and so, became the Mayor of Williamsburg for a time. Other positions he held include the Commissioner of Waterworks, Commissioner of Highways and Head of the Brooklyn Navy Yard. He advised President Lincoln during the Civil War, as a member of Congress, and post-war, he was a delegate to the National Union Convention. Following his death, Wall was laid to rest in Brooklyn, at the Greenwood Cemetery. His legacy — and what he did for the city of New York, will forever be part of history.

That might sound like hyperbole at first, but the press has been singing the Honorable William Wall’s praises for some time now. Urbanologie, for instance, included the bar in its recent feature, New York’s Best Boat Bars, and The Infatuation had plenty of nice things to say when they mentioned Ol’ Willy Wall in their list of 15 Unique Bars in NYC, likening the establishment to a charismatic character in a film:

“You know that scene in a movie when the hero is about to get defeated, then a third party shows up to save the day? That third party is The Honorable William Wall. It’s a floating bar anchored near Ellis Island, and it’s just sitting there, waiting to save you from the humid, crowded summertime version of NYC that tends to smell like warm garbage.”

And so it goes, with multiple outlets hailing the Honorable William Wall as a great place to float in for a drink and rest upon the New York waters. That “on the water” detail might be a sticking point for you, but allow us to point out that once you purchase a ticket, the steps for getting to the bar are ridiculously easy:

And that’s it. You’re now at the Honorable William Wall and ready to have a great time. What’s included in that great time, you might wonder? Well, for starters, what about the amazing views? From the water, you can catch a fantastic look of the NYC skyline and the lovely harbor (so bring your camera). In addition, you’ll have an opportunity to spy some of those cool boat races:

“On a weekly basis, several times per week, sailing races are held in the New York Harbor waters by the Manhattan Yacht Club. The Willy Wall is the best place to watch these races, as you’ll get incredible views and be spectating alongside a lively, friendly crowd, able to chat to other yachting enthusiasts throughout the day and learn a little more about the club and its races.”

And if you’re thinking about learning more about sailing yourself, you’ll want to check out the Manhattan Sailing School too. They’re affiliated with Willy Wall, and this is where you can take both nge into making this lovely setting your new Manhattan home.