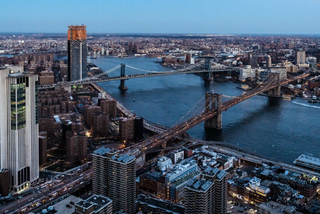 The Brooklyn bridge turned 135 years old this month, making it one of the longest standing icons in New York City. People from around the world have been fascinated with this landmark since it was built, but why?

What is it that makes the Brooklyn Bridge so iconic, memorable, and timeless? While you’ve probably seen it a thousand times from the high-rise apartments in the Financial District, chances are you never knew these interesting facts.

The Bridge Was A Long Time Coming

New Yorkers had been considering the construction of the Brooklyn Bridge almost 70 years before it was actually built. Multiple ideas were proposed for a way to cross the East River, but none of them satisfied the construction needs of the time while still allowing ships to cross underneath. Wooden bridges couldn’t remain stable over such a large expanse, it would be too long for a drawbridge, and a lever bridge wasn’t cost effective.

Once construction began, New Yorkers considers the Brooklyn Bridge a symbolic start of a new age. This is contributed to the fact that no other bridge in the world would be as grand as this one was about to come. Planners, engineers, and architects alike knew they were taking on an incredible task.

In 1860, this was the largest suspension bridge the world had ever heard of, rivaling architectural marvels like the Suez Canal and transcontinental railroad. It was the first bridge to utilize steel construction, it had the largest towers ever seen, and the length alone was astonishing.

One of its designers, John Augustus Roebling, called it the, “greatest engineering work of the continent, and of the age.” It helps establish New York as one of America’s top destinations and gave New Yorkers something to be proud of.

A project that grand always comes with challenges, and the Brooklyn Bridge’s towers happened to be the toughest aspect of construction. Once the idea of identical 268-foot-tall towers came to mind, work began to distinguish them.

The arches are Gothic by design, allowing the roadways to pass through while creating a timeless motif out of something new to the city. To this day, the towers stand as a symbol of the city. Could you imagine New York without them?

John Roebling might have been the original designer, but he never got to the see the project through to fruition. It would instead be Emily Warren Roebling, his son’s wife, that would take on the challenge and ensure the project was finished as well as structurally sound.

She was the one of the first women in America to oversee such an incredible build and achievement, and was also the first woman to cross the bridge upon its completion. New York has long been a forward-thinking, cultured center of the world, and Mrs. Roebling’s accomplishments speak to the nature of this city.

The Bridge Used to Hold Wine

In order to fund the bridge, large vaults within the towers were often rented out to businesses. One of the more popular was known as the Blue Grotto. This decadent wine cellar served the people of New York up until the 1930’s and utilized a lot of the same stylings you’ll find in New York bars to this day.

A Feat of Strength

At one point in time, a panic swept over New Yorker’s on the bridge. One person’s fall down the stairs caused a chain reaction that lead many to fear the bridge wasn’t stable enough to handle the weight of its hundreds of travelers.

To demonstrate the structural soundness of the Brooklyn Bridge, the city hired P.T. Barnum to help put the people’s fears to rest. He employed 21 elephants from his circus, including his African elephant Jumbo, and paraded them across the cable-held roads along with multiple camels. Needless to say, it showed New Yorkers that the bridge was built to last.

The Strength of the City

New York City is as resilient as they come, but the strength of its people and businesses is part of what makes the Big Apple so appealing. The bridge’s cables are a testament to that strength.

It’s All in the History

Aside from sharing in the key aspects that define New York City, the Brooklyn Bridge remains so iconic because it is an integral part of Manhattan’s history. It was the first structure to form the “bigger and better” mentality found in the cities skyscrapers, as revolutionary as the speakeasies under the city streets, and as timeless as NYC itself. The bridge has been and will always be an image immediately associated with life in the city.

From the inspired modern interiors of these homes to the plethora of onsite amenities, this is downtown Manhattan’s premier address.

Each home includes lofty ceilings, high-end appliances, and finished oak floors with ceramic tile bathrooms. Expansive windows offer breathtaking views of the city, while the finest in furnishing provide comfort and warmth. Your location also gives you immediate access to the subway station and PATH terminal via the underground walkway for a simple commute.

On the third and fourth floor, you’ll find multiple amenities carefully selected to match a variety of New York lifestyles. A business center and meeting rooms cater to the entrepreneur, while the media and gaming center keep you connected. A state of the art fitness center provides residents with everything from boxing to yoga, and the indoor lounge with rooftop terrace provides the ultimate in relaxation with a stunning view. Learn more.